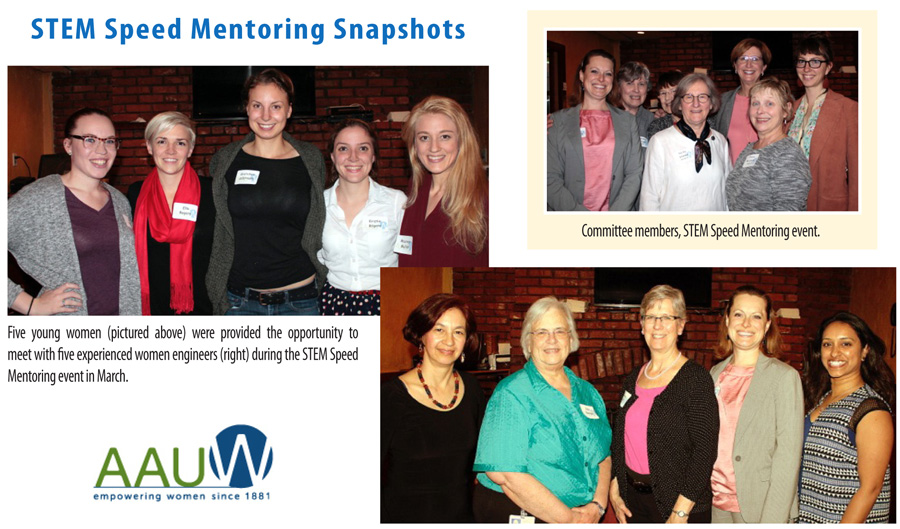 Please contact marianmcclellan@mac.com or 630-659-7748 if you would like to volunteer for future events to support and promote women in STEM career fields.

After a morning of meetings, inspiring speakers and marching, we set about as citizens’ lobbyists to visit with legislators. We distributed copies of AAUW’s booklet, The Simple Truth, while requesting their support to close the gender pay gap. To our surprise, we learned of the convening Senate committee hearing. We attended and witnessed bill SB 144 Equal Pay Legislation pass out of committee. The bill will next move to the floor of the Senate for debate. 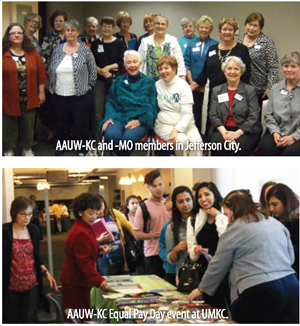 SB 144 requires the Department of Labor and Industrial Relations to establish guidelines relating to gender pay equality. Once this bill becomes law, we women’s advocates will push for an amendment stipulating penalties to be applied to employers in violation.

Equal Pay Legislation is on the move in Missouri! What more fitting close to an exciting, productive day at the Capitol in Jefferson City, Missouri.

While our AAUW sisters were in Jefferson City, Patti Jackowicz and Winnie Weinrich went to UMKC to help set up for an Equal Pay Day event on campus in the Miller Nichols Library. Each of the four participating sponsors met with students and explained their connection and commitment to fighting the gender pay gap. Of the 139 students who visited our booth, 110 of them signed up to receive more information about AAUW and the free student membership. We have since followed up with these new young contacts and look forward to them joining us soon! 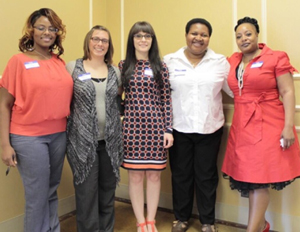 On April 11, 2015 the Kansas City InterBranch Council presented the annual Reentry Scholarship Award to six outstanding women who returned to the college classroom after an absence of five or more years. While all applicants were very worthy candidates, these six women best exemplified the courage and personal resolve to overcome significant barriers to pursue their academic, career and life goals.

In attendance, along with the high school young ladies, were family members and friends, school representatives, and AAUW members.

These young women were recognized for their accomplishments and received certificates. The following girls received $1,000 scholarships to the college or university in which they are enrolled: Mi Dohn, East High School; Hannah Wilczewski, Southwest Early College Campus; and Shereese Brown, Ruskin High School.

The guest speaker was Dr. Marjorie Williams, a former superintendent of the Hickman Mills School District and a well-known educator – she gave an inspirational presentation about opportunities for young women as they attempt to reach their educational and life goals. 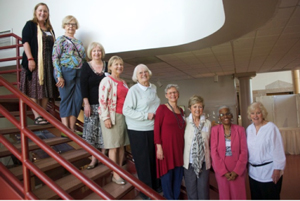 Special thanks to the 100 High School Girls committee for their dedication in making this annual event such a great success!

Following a lovely potluck dinner with fellowship and conversation, President Nicky Stanke addressed the group of 33 in attendance at the June Celebration Picnic. She welcomed all including new member Judith McGunegle, who only recently moved to Kansas City and just joined our branch at the picnic. When Judith was asked how she knew about the KC Branch and about the evening’s event, she answered that she found the information on our website.

Prior to introducing the two Centennial Scholarship winners, Nicky read an inspiring email from 2013 Re-Entry and Centennial Scholarship winner Crystal Wolfe. She sent her regrets about being unavailable to join us, but she is currently at NASA doing an internship. Crystal, majoring in Engineering at UMKC, expressed her appreciation to AAUW for awarding her two scholarships last year. 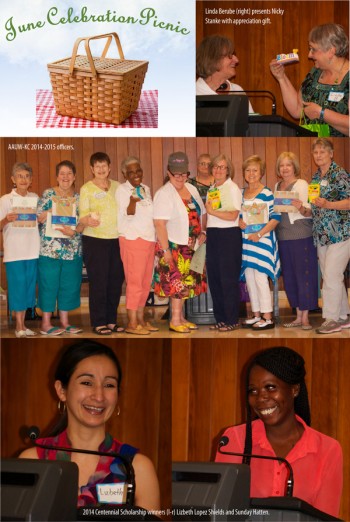 Nicky then introduced the two 2014 Centennial Scholarship winners—Lizbeth Lopez Shields and Sunday Hatten – and asked each woman to tell a little bit about herself.  Lizbeth, attending with her husband and two children, said she is working toward a degree in Nursing and Social Science at Maple Woods Community College.  She thanked AAUW-KC for its generosity.  Sunday said she attends Penn Valley Community College and is the mother of seven children, with the added remark that it requires much dedication and determination to return to school.  She complimented us on the history book published in 1993, celebrating the 100 year anniversary of the Kansas City Branch. Sunday said she was most grateful for the scholarship.

Nicky said it was her honor to announce the two “Named Gift” recipients … Pamela Burke and Renee Carlson.  The number of annual recipients for each Missouri Branch is determined by the per capita contributions for the program year.  Nicky commended Pam and Renee, the Program Co-Vice Presidents this past year, for the many superb programs that they planned and presented to the Branch in 2013-2014.

She then gave her remarks as outgoing President.  Nicky shared our sadness at the loss of our dear friend and member, Gloria Bandstra; but remarked that Gloria would have wished for us to go forward in our efforts to attain equity for all women.  She thanked the many women who helped and supported in her journey:  Carrie Maidment and Pam Chaudoin—Thorpe Menn Literary Awards Luncheon; Jane Crigler and committee—Irene Wagy Awards Luncheon; Earline Bentley and Dana Perry—100 High School Girls Scholarship event; Stephanie Holthaus—Re-Entry Chair; Joanie Shores and Jane Crigler—Public Policy; Ardy Pearson—Branch History project; Ellen Johnson and Stefanie Hatfield—Finance Chair and Finance Officer; Earline Bentley and Sara Pedram in their efforts to recruit and retain membership.

Additional “celebration” comments included: In 1939 at the AAUW National Convention, the attendees rejected the ERA–but the good news is we’re still working to get it ratified. She commended Jane Crigler and Joanie Shores for their tireless efforts in this regard. In the past 20 years we have donated $57,000 to the AAUW funds. She thanked Stefanie Hatfield, Dana Perry and Ellen Johnson for their many creative ideas to raise funds for the Dollars for Scholars program, and most recently, Dana Perry’s project of selling tickets to the film “Wadjda” and to the KC Women’s Chorus spring concert, with portions being contributed to Dollars for Scholars. She thanked Marian McClellan and Carrie Maidment for compiling, editing and publishing the monthly AAUW newsletter with superior guidance from Linda Berube.

The drawing for the two raffle tickets to the Metropolitan Ensemble Theater (contributed by Winnie Weinrich) was then held. The lucky winner was Maureen Hurley, who thanked Winnie for her generous contribution and said she enjoyed theater. Marian McClellan won an AAUW bag of goodies for having paid her 2014-15 dues by June 5.

Nicky Stanke called Linda Berube to the podium and presented her with an appreciation gift for her two years of exemplary service as AAUW-Missouri State President, with a round of applause from the audience.

Linda in turn presented Nicky with a special gift of appreciation for her leadership in 2013-2014.  She then presided at the Installation of Officers for 2014-2015 with special proclamations and gifts for each officer. (See listing of officers in “About Us”.)

Nicky then turned over the gavel to 2014-15 President Winnie Weinrich. She was wearing an expansive purple hat and began by reading several quotes by Bella Abzug. Winnie shared her top three goals as president:

2) Offer our Homecoming event in September to former members and invite them to return to AAUW-KC.

3) Identify four college girls (and help with expenses) to attend NCWSL in June 2015.

Other business and announcements:  Linda Berube reported that 11 members and four students are registered to attend the regional conference June 14-15 at Four Seasons Lodge (Lake of the Ozarks). Corinne Mahaffey requested that anyone who has AAUW archival items to please contact her. She will pick up the items or photograph them for Branch historical records.  Joanie Shores announced the annual KC Women’s Equality Week is scheduled for August 24-29 and that volunteers are needed. 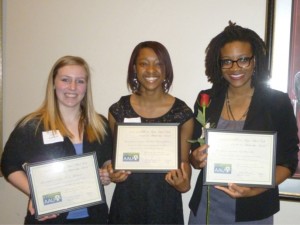 On April 6th the 100 High School Girls annual scholarship award program honored 100 young ladies from area high schools on their academic success. The event was held at the Bruce R. Watkins Cultural Heritage Center in Kansas City. Three young ladies were awarded scholarships for their community service, leadership skills and academic success. Pictured left to right: Dixie Robinson from Northeast High School plans to attend Avila University to study Advertising and Public Relations; Candace Cunningham from Center High School plans to attend the University of Missouri Columbia to study Occupational Therapy; and Cynthia Odu from Lincoln College Preparatory Academy plans to attend the Massachusetts Institute of Technology to study Computer Science. Thank you to our guest speaker Barbara (Barb) Shelley, a columnist for the Kansas City Star and advocate for the education of girls and women. 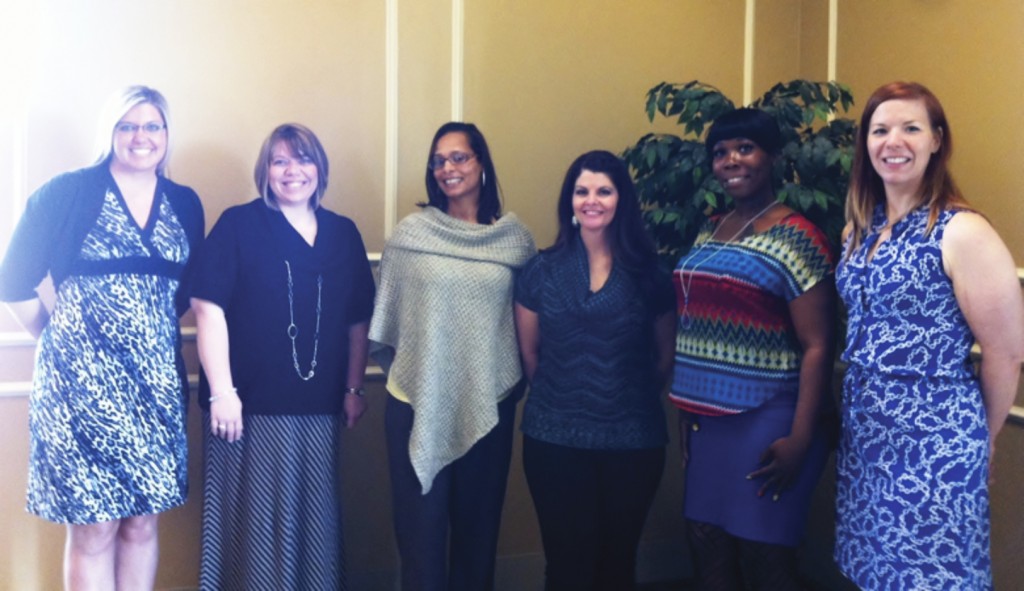 On April 19th the InterBranch Council presented the annual Reentry Woman of the Year scholarships to six women who best exemplify the courage, effort and perseverance to return to the classroom after an absence of five or more years. Pictured above, left to right: Ashley Parker, MCCC Longview; Donna Young, UMKC; Angela Blackmon, MCCC Penn Valley; Rachelle (Shelly) Hardin, MCCC Blue River; Sunday Hatten, MCCC Penn Valley; and Rebecca Lassiter, MCCC Longview. Everyone enjoyed a delicious brunch at Unity Village and left inspired by the stories shared by the honorees.