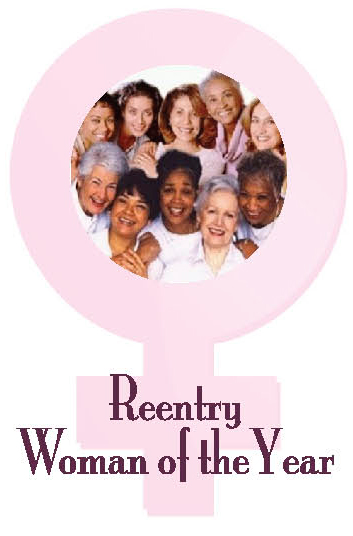 This annual event taking place in the dining room at Unity Village is hosted by AAUW-KC Northland and presented by the InterBranch Council (IBC). Scholarships are awarded to women who best exemplify the courage, effort and perseverance to return to the classroom after an absence of five or more years. Come and hear their inspiring stories!

The cost is $25. For reservations, mail check (payable to AAUW-KC Northland Branch) by April 9 to Cela Sullivan, 4341 Northwest Briarcliff Lane, KCMO 64116. Donations for brunch costs for award recipients and Reentry scholarships are welcome! For more details, contact Cela at 816-797-8685 or cel1777@sbcglobal.net.

Since 1931, the Kansas City Branch of AAUW has honored outstanding high school senior girls. College scholarships up to $1,000 are awarded annually. To be eligible, students must submit an application and essay by March 15, 2019, and be a current student of one of the following area schools: Central Academy of Excellence, East High School, Northeast High School, Southeast High School, Paseo Academy of Fine and Performing Arts, Lincoln College Preparatory Academy, Ruskin High School, Center High School, and Grandview High School. 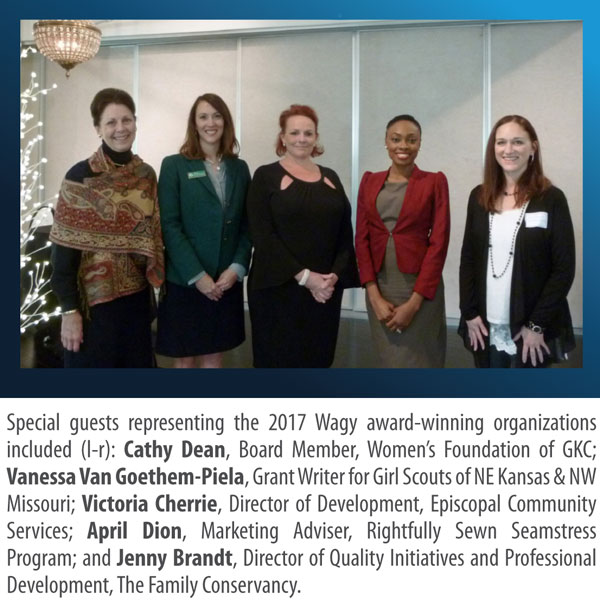 This year’s event marked our 20th presentation of the Wagy Awards, which gives funding to local community organizations for their work in advancing education and equity for women and girls. A total of 85 awards have been presented and $225,575 in Wagy funds have been provided over the past two decades, including this year’s five recipients and awards totaling $10,000.

The 2017 Wagy award recipients and programs:

On April 22 the Kansas City InterBranch Council presented the annual Reentry Woman of the Year Award to six outstanding women who returned to the college classroom after an absence of five or more years. While all applicants were worthy candidates, these six women best exemplified the courage and personal resolve to overcome significant barriers to pursue their academic, career and life goals. Each of these women aspires to make a difference in the lives of others and in their community. 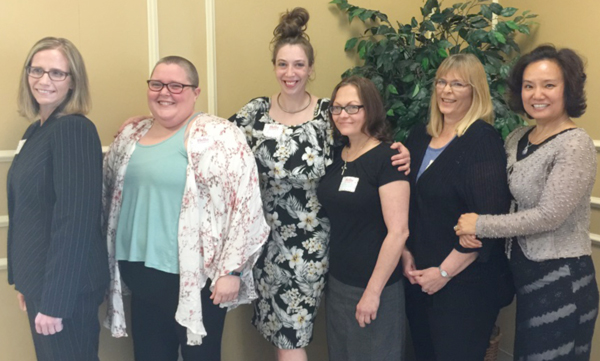 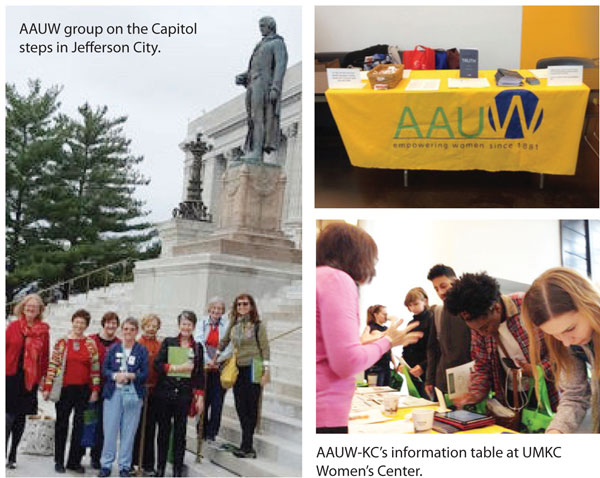 Busy, busy, busy, aptly describes April 4 (Equal Pay Day) for many AAUW members! Public Policy Committee Co-Chair Carol Cowles organized a bus load of members from AAUW-Kansas City and -Independence, as well as members of the League of Women Voters and serveral other interested activists to travel to the Capitol in Jefferson City for Equity Action Day, organized by the Missouri Women’s Network. They joined over a hundred women (and a few men) from St. Louis, Columbia and throughout the state to dialogue with, learn from, and lobby legislators. Topics included pay equity, reproductive justice, human trafficking, and the victims’ employment safety and security act. In addition to members of AAUW and LWV, those in attendance included members of Planned Parenthood, National Council of Jewish Women, National Organization of Women, Vision 2020, and Coalition of Labor Union Women.

Following an introduction to Issues of the Day, the group lobbied their senators and representatives. During lunch, legislative briefings by Sen. Lauren Arthur, Sen. Gina Walsh, Sen. Scott Sifton, and Rep. Jean Evans provided opportunities for questions and answers. An afternoon lobbying session and meeting with State Auditor Nicole Galloway concluded the day.

In addition to handing out AAUW’s Spring 2017 national report, The Simple Truth About The Gender Pay Gap, AAUW gave out PayDay candy bars. A total of 68 students took part. AAUW-KC signed up 33 enthusiastic new student members including quite a few men! In coordination with the event, the UMKC Bloch School of Business presented a workshop on salary negotiation. Riva and Patti enjoyed many rich and fulfilling conversations with the students who attended.

As the daily political news hits, remember that a personal AAUW response is only a “click” away. A“Two-Minute Activist” tab on the national AAUW website (www.aauw.org) is an easy and efficient way to stay in constant contact with your Senators and Representatives. 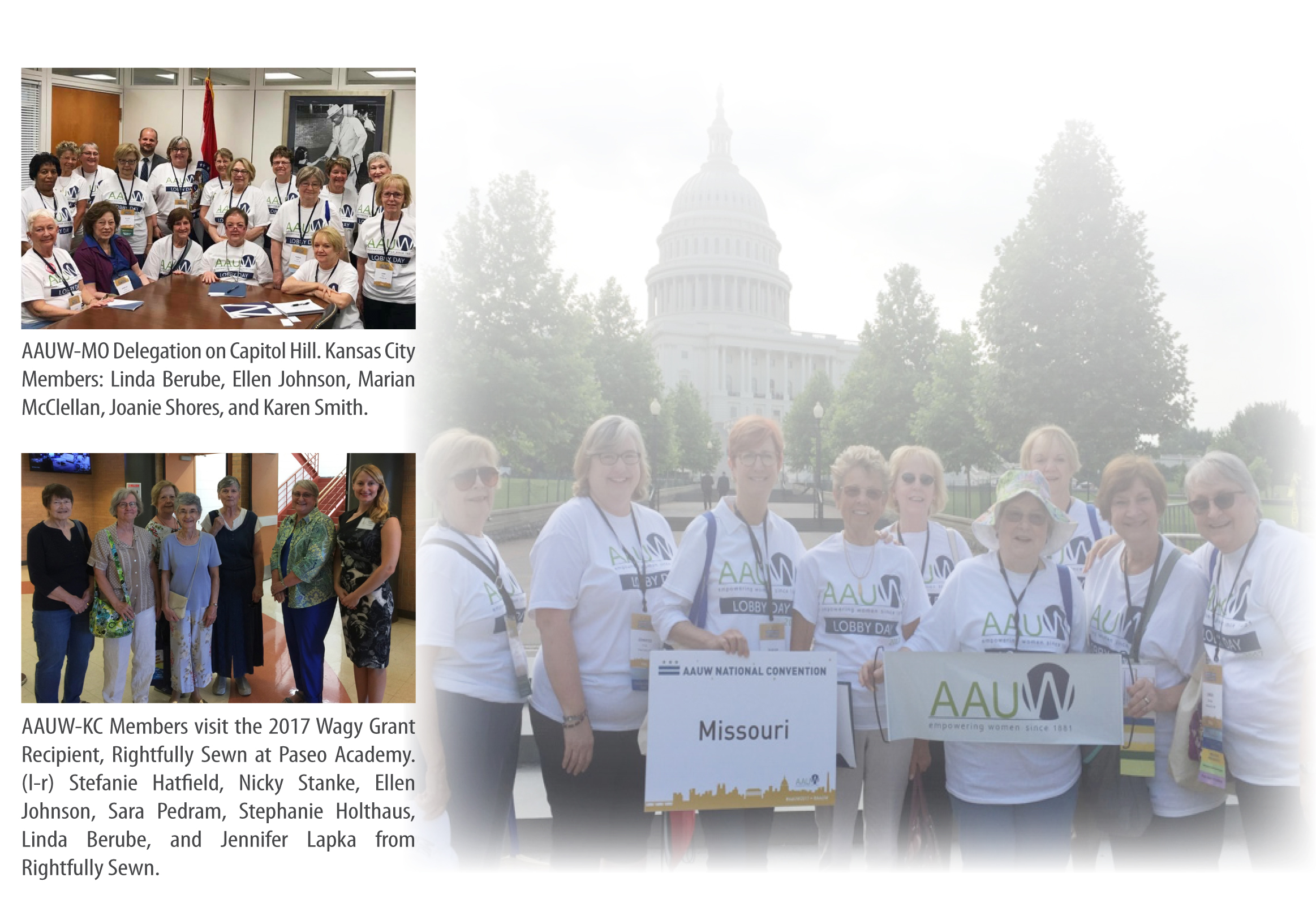